For the past two winters, Indianapolis residents Ted and Cindy Meyer have called Cary home. It’s a place to escape the winter weather and spend time with family who live here.

There’s one group the Meyers always look up when they’re in Cary – the Wake County chapter of the Audubon Society.

The two began birding 15 years ago, and even first met on a bird walk. It’s been love for each other, and love for the birds, ever since.

The Meyers are not alone. According to a National Survey of Fishing, Hunting and Wildlife, 47.8 million U.S. residents participate in birding around their home or on trips.

Locally, the Wake Audubon chapter has roughly 1,500 members, often seeing 50 members at monthly meetings and anywhere from a dozen to 40 people on the bird walks they lead each month.

A great blue heron wades off a point on Lake Crabtree, where birders meet regularly on weekend mornings to look and listen for birds.

“It’s the biggest secret sport in America,” said Lynn Erla Beegle, a Wake Audubon volunteer who leads many of the group’s bird walks.

The popularity of birding seems to lie in the fact that it’s a hobby that begins in the backyard by putting up a bird feeder. The cost is relatively low, and birds are simply fascinating to people.

“A lot of people have had an ‘a-ha’ moment,” Beegle said. “They can remember the moment when they were astounded by a bird.”

Beegle formed a bird walk group on meetup.com in 2009. Attendees don’t have to be Wake Audubon members and don’t need to know anything about birding. 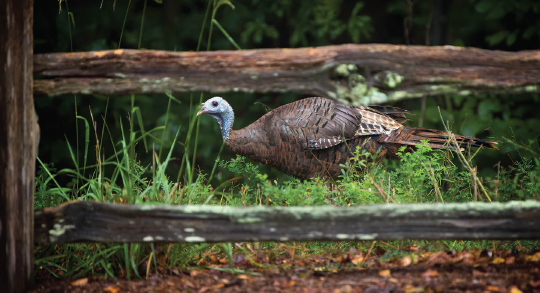 A wild turkey forages near a parking lot at Lake Crabtree Park in Morrisville.

Since then, a steady stream of people have joined the walks at places like Yates Mill Pond, where Beegle recalls the group running from the parking lot recently to catch a glimpse of a snow goose in the pond. To see one in Wake County was a rare treat.

On a normal day though, walks are leisurely and last about two hours. The walk leader will point out birds and other wildlife  to the group. Sometimes, there are some advanced birders on the walk who take it to a new level.

“It’s almost an intellectual challenge for those who decide to pursue it,” said Ted Meyer.

An advanced birder will understand not just visual markings, but also habitats, behaviors and calls, he said. 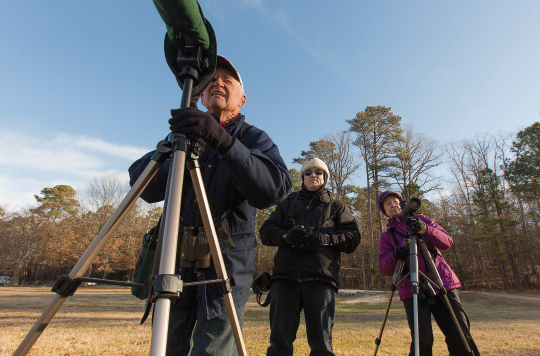 Ted and Cindy consider themselves “intermediate” birders. Ted serves as president and treasurer for their local Audubon chapter in Indianapolis.

“We have taken vacations just to bird,” he said. “We bird anywhere we are.”

They always look up the local Audubon chapter when they travel, to learn more about birds in that area, Cindy said.

“The nice thing is, you’ve got an automatic group of people who have your same interests,” she added. 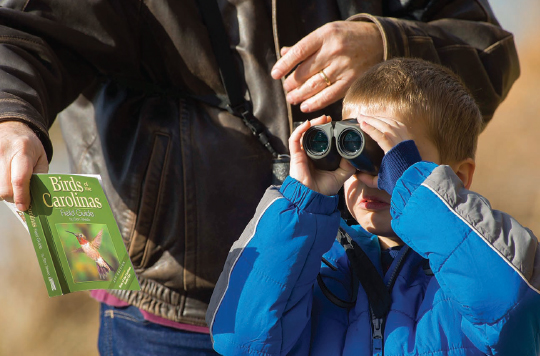 The three branches of the Audubon Society involve education, conservation and advocacy.

“We view the birds as a window into the environment,” said Gerry Luginbuhl, a retired professor of microbiology at N.C. State, who is a board member and past president for Wake Audubon.

The group’s 2015 calendar is filled with events such as monthly meetings, where a keynote speaker might discuss invasive plants and the threat they pose to native birds in North Carolina.

One of the group’s  biggest projects currently is fundraising and construction of a hollow brick tower in partnership with the N.C. Museum of Natural Sciences, at its Prairie Ridge Ecostation.

The tower will serve as a nesting ground for the chimney swift, which migrates to North Carolina and nests in late summer, Luginbuhl said. 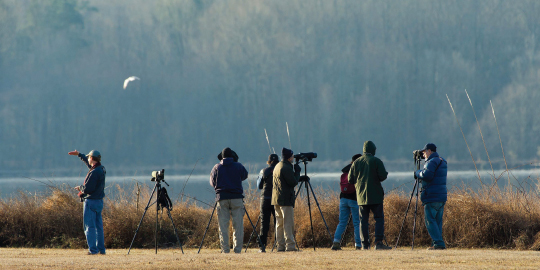 Chimney swifts historically nested in hollow trees, but began nesting in chimneys. As chimney caps and screens have become popular, the birds are losing their nesting grounds.
Once the tower is finished, the group will install webcams to allow for research, and individuals and groups will be able to visit the nesting grounds.

Members have also spoken in front of local government groups to influence environmental policy. They see it as their duty to help people see the bigger picture – how harm to one part of the environment can affect the whole environment.

Wake Audubon volunteers can be found at local events like the Songbird Celebration at Blue Jay Point County Park in Raleigh on April 25, where they’ll share information about Wake Audubon projects and have a table set up with family- friendly activities.

They take field trips in which they camp, bird and hike for the weekend. Recently, members took a trip to the Outer Banks, which was led by graduates of the Young Naturalists Program.

The Young Naturalists are youth ages 12 to 18 who are interested in natural sciences and want to explore the outdoors. They go on monthly excursions and take part in environmental service projects.

“We’re really working to make sure it’s not just us older folks,” Luginbuhl said. “We need people to carry this on.”

Beegle notes that people who get out in nature are going to be more likely to care for nature.

“It’s a chance to get outside,” she said. “If people don’t remember what it’s like to walk in the woods, they’re not going to want to save the woods.” 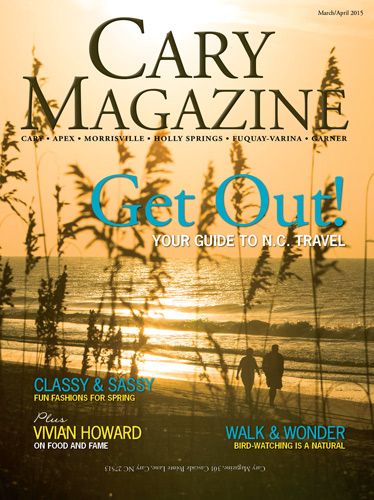