Ann Marie Calabria is someone who gets things done.

Upon her retirement from the N.C. Court of Appeals in December 2018, she was honored by the North Carolina Bar Association and was awarded the Order of the Long Leaf Pine by Gov. Roy Cooper. In October 2019, she received Cary Magazine’s Women of Western Wake Lifetime Achievement Award.

“Describing her personal and professional impact on others is a big question. … She has had so much of a positive impact on the North Carolina legal community, the state Court of Appeals, the law school, and countless lawyers in Raleigh and across the region.”

The laundry list of awards isn’t surprising to those who know Calabria well. A petite woman, she radiates energy, enthusiasm and a nearly palpable kindness. Her drive to help others and her impatience with laziness were instilled in her from childhood.

“I don’t even know what the word ‘bored’ means. I said that to my children, too. I said, ‘If you’re bored, then you’re not helping someone, because there are people out there that need help.’”

At Cary Magazine’s Women of Western Forum, retired Judge Ann Marie Calabria was honored with the Lifetime Achievement Award. Throughout her life, she says she has been guided by the principle: “Strive for excellence, not perfection.”

A graduate of Campbell University’s law school, Calabria spent a decade in private practice before becoming a Wake County District Court judge in 1996. While in that post, she saw many people come through her courtroom who couldn’t speak or understand English. A desire to help these folks led her to the Triangle Literacy Council. In 2000, she began her long affiliation with the group by facilitating English as a Second Language classes for nonviolent defendants.

“She was always there for me. She’s one of those people that I know if I called her at three in the morning and told her I needed her to drive two hours in the middle of the night right then and come get me somewhere, she would do it.”

Calabria, who was elected to the N.C. Court of Appeals in 2002, partnered again with the Literacy Council in 2009 to establish a tutoring program for at-risk and court-involved juveniles.

Although a simple idea, there were several obstacles — from the confidentiality required by the courts, to office space and parking for the tutors. Calabria matter-of-factly describes how she and Laura Walters, president and CEO of the Literacy Council, toppled each one. Thanks to AmeriCorps staffers, Campbell law student volunteers and a donated office in the courthouse, the Juvenile Literacy Center opened.

Calabria says seeing the program’s impact energized her. She describes a teenager, a D-student in high school, who was referred for tutoring early on.

“After coming to the Literacy Council and being mentored one-on-one, she got into the AB honor roll. She was wonderful,” said Calabria, who now chairs the nonprofit’s board. “If we can do that with one person, then we can do this with lots of kids. We have to give them hope, that they all can do this.”

Her former colleague Judge Valerie Zachary considers Calabria’s work with the literacy council one of her friend’s most influential accomplishments.

“She’s grown it from this small program into a multi-county effort. It’s spreading across the state now and has had tremendous success,” said Zachary, who has served on the N.C. Court of Appeals since being appointed by Gov. Pat McCrory in 2015.

Calabria will focus on a problem with dogged intensity, her friends say, turning the issue one way and another until she figures out a solution. 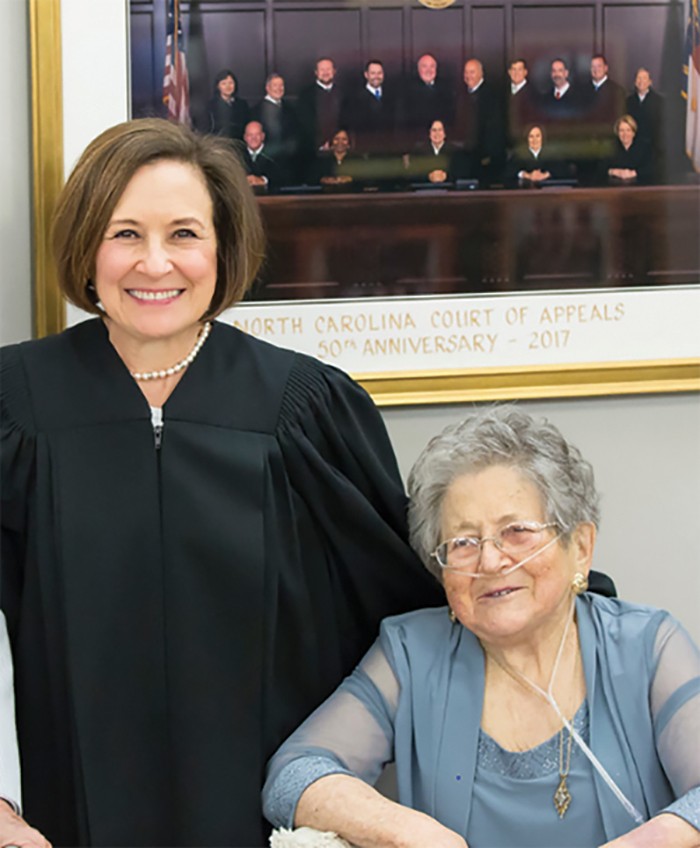 Ann Marie Calabria and her mother, Rose Comitta, attend the 50th anniversary of the N.C. Court of Appeals in 2017. Calabria credits her mother, who died in December 2018, for instilling in her a strong work ethic and a dedication for public service.

“My assistant was a clerk for her, and we always laughed, if you want something done, you want Ann Marie on it, because she will not take ‘No’ for an answer. She’s not ugly at all, very pleasant, but she gets it done,” Zachary said.

“She epitomizes what I call a ‘can do’ spirit,” said Britt Davis, vice president for institutional advancement at Campbell University. “There is no mountain that cannot be climbed; there is no valley that cannot be crossed. Or, there’s no program that we can’t develop; there’s no person that we cannot gain the support from for a particular initiative.”

Davis has known Calabria since 2007, when he was working to raise money to relocate Campbell’s law school to downtown Raleigh.

“She is positive, upbeat, but tenacious and focused,” he said. “I’ve never met someone who will look at a challenge quite like her. She will simply say, ‘Why can’t we do it?’”

She has opened doors and found opportunities for law students, he says, and has served as a role model for countless young women seeking a career in law. Calabria and her husband, Bob, further support these students through a scholarship they established at Campbell.

“It gives me great pride to know that every year we have a Judge Ann Marie Calabria law scholar walking the halls of the Campbell University School of Law,” Davis said.

Looking back on her career, Calabria is proud that in 22 years of being a judge, she was able to help people resolve their disputes peacefully in thousands of civil, criminal and juvenile cases. She is also proud that she was able to care for her family, raise her three children and teach them the value of serving others.

“They are all good friends, and they do things together as adults. We take family vacations; we celebrate all the birthdays,” said Calabria, who also has eight grandchildren. “I feel like that’s a personal accomplishment, too.”