It’s part of the reason they launched a run club more than four years ago — before their Cary brewery was even completed. And as runners, there’s one thing they know for certain: When it comes to fitness, sometimes people need a little help from their friends.

“For me, group fitness means support and someone there to push you when you’re maybe not feeling it that day,” Jay Bond said. “For others who aren’t as intense, it’s just having that support system that really helps.” 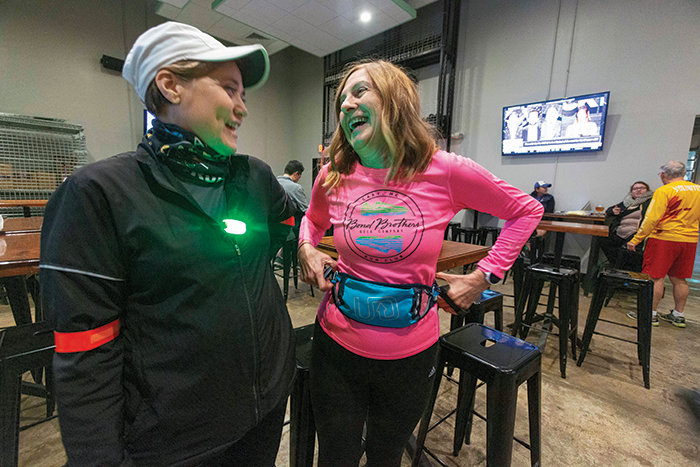 Elizabeth Lamsen, left, and Maggie Lockemer gear up for an evening run with the Bond Brothers Beer Company Run Club.

From running and walking to tennis and pickleball, fitness groups can be a motivator to keep up the healthy routine, organizers say. The social aspect is a reason to keep coming back, and, if a person has specific goals, finding an accountability buddy can help them work toward those goals.

For members of these local fitness groups, it’s more than just a workout. Both friends and fitness keep them coming back. 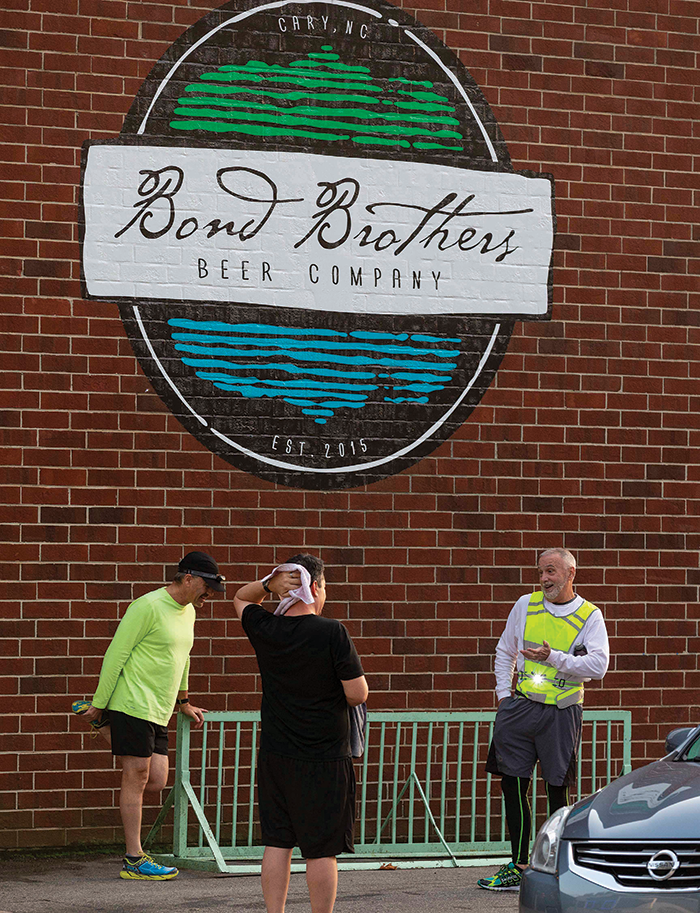 Before launching their own running group, the Bond brothers often ran with other clubs in the area. A club of their own was a way to introduce people to the brewery, which was then under development.

More than 3,000 people have come out to run in the four years since, and anywhere from 100 to 250 people show up each Tuesday for their regular run, depending on the season and the weather. The run kicks off at 6:30 p.m. from the brewery with the option of either a 3- or 5-mile route. Once the workout is done, runners come back to the brewery to socialize and have a beer. 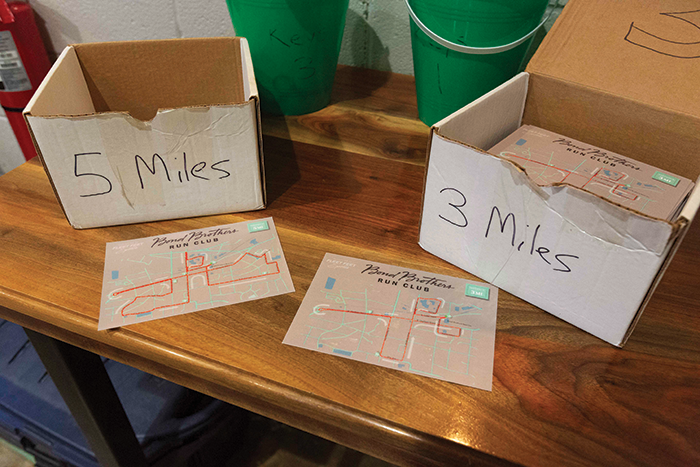 Handheld maps detail the turns for a 5-mile and a 3-mile loop from the brewery and back.

The level of intensity and commitment varies for each runner – some are training for a race, some just want to chat with friends and get some exercise, Jeremy Bond says. The company hosts a charity 5K each year and sponsors several other races.

“Run club can be a good way to meet others who have similar goals and ambitions,” he said.

Knowing that someone with the same goals is there looking for you each Tuesday can serve as a motivator to keep coming back and training, he says. 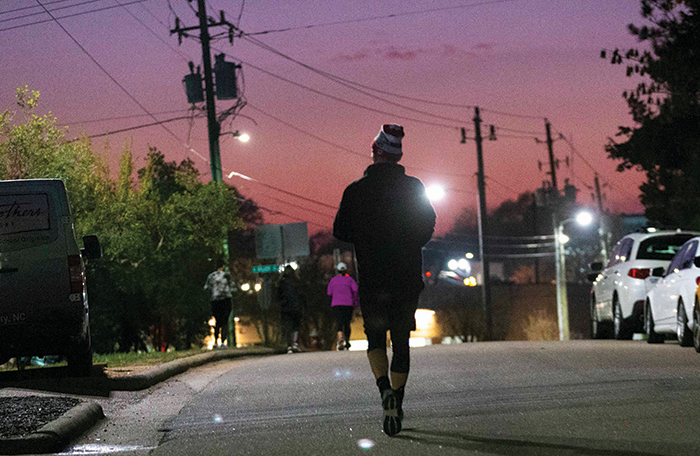 Anywhere from 100 to 250 people show up at the brewery to run. It’s more fun to run in a group, and during dark winter evenings, it’s also safer.

“There’s a lot of socializing, and people meet new people,” said Jay Bond. “Running is always a lot more fun with other people – it can be a little lonely to run by yourself.”

“I am not a runner, but it was a social time for me and my friends to get together once a week,” she said. “It was not intimidating; there are all skill levels of runners and non-runners.” 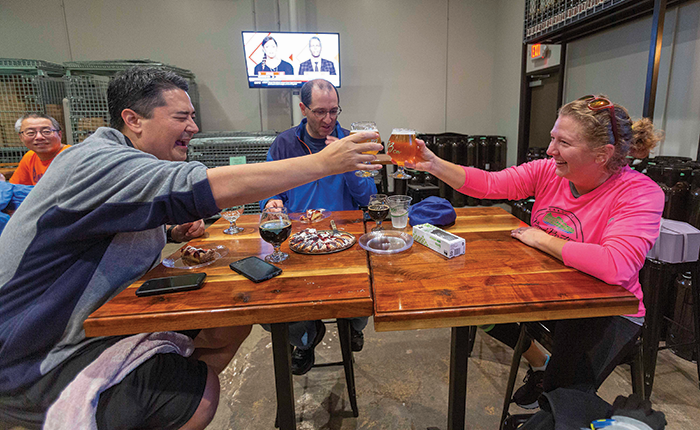 After a run, Stephanie Harris raises a toast with Michael Watkins, as Frank Barnhart enjoys a slice of cake. “Run first, then beer and cake,” Harris says. “We are all friends. This is an excuse to see each other; and if we get some exercise, then all the better.”

Pat Black knows a lot about the link between being social and keeping with a fitness routine. She began the Apex Fitness Walkers group in 2008 through meetup.com, which serves as a web platform for folks with similar interests to organize — from fitness groups, to writers who want to share ideas, to women programmers who want to network, and everything in between.

At the time, Black had what she calls “a change in her life plans,” and, seeking to make new friends, she started the group.

“It’s one of the best things I ever did,” said Black, who is now friends with numerous Apex Fitness Walkers.

The group keeps it simple, with 10-24 people meeting every Saturday morning at the same time at Apex Community Park. They walk just over two miles at what they call a “moderate pace,” not too slow and not too fast. Afterward, they often head to a nearby McDonald’s for breakfast and end up talking for hours, Black says. 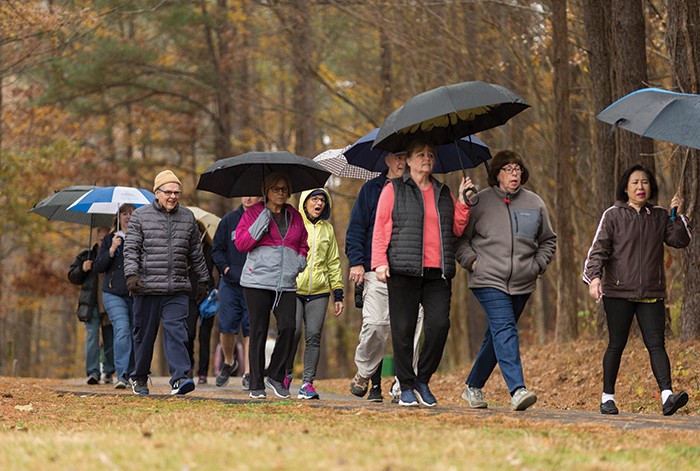 Every Saturday morning, a group of walkers meets at Apex Community Park for a moderate 2-mile trip around the lake. After their walk, several of the group head to McDonald’s for breakfast

A core group of them have become such good friends that it keeps them coming back week after week and has led to the group being not just fitness-oriented but socially-oriented as well. They gather regularly to take in outdoor concerts, meet for dinner to celebrate members’ birthdays and even plan holiday seasonal events together.

New members join, and other members move on as they move in and out of the area, or have other commitments, Black says. Whether a group member needs someone to hold them accountable, or simply doesn’t want to miss out on seeing their friends, the group atmosphere can keep them coming back.

“I know that within our core group, if someone misses a week, others will say, ‘We missed you. Where were you?’” Black said. “There are also people that come out to walk who probably hadn’t thought about walking, and then they like it and enjoy that they have others to talk to while they walk.”

Because their group has become as much a social group as a fitness group, Black added several other administrators to her meetup group who can also schedule events. She says they’re always open to suggestions and have done everything from playing dominoes, to hiking at Hanging Rock State Park.

Message the organizer through the website, or view upcoming walks and social meetups. This meetup group is public, meaning event locations and times can be viewed without becoming a member of the group. 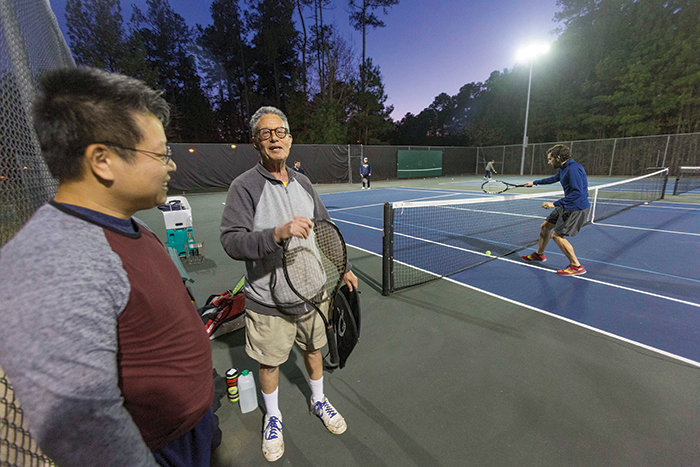 Wayne Hui and Randy Wasserstrom, members of the For Fun: Tennis/Pickleball group, socialize before joining others on the court at Apex Community Park.

Hui moved to the area from Chicago in 2011, not knowing anyone locally. He joined an existing tennis group through meetup.com, and then took over the group when its original organizer stepped down. He’s run the group for more than three years now, adding pickleball meetups in addition to tennis after a friend introduced him to pickleball.

The group plays pickleball each Monday evening at Method Community Park in Raleigh and tennis on Wednesday evenings at Apex Community Park. More than 800 members have joined the group, though actual meetups range in size from eight to 12 members because of court availability for the two sports, Hui says. Events are always full, so the group has added additional sessions to allow more members to join. 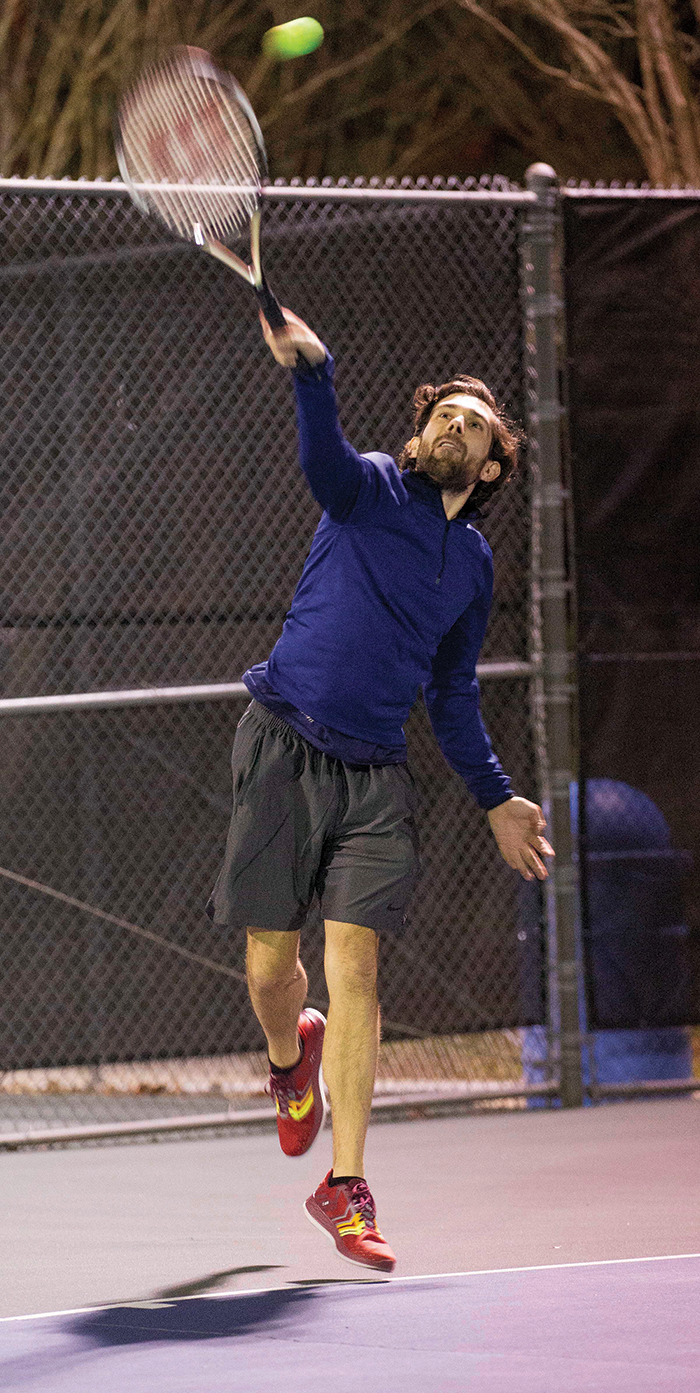 “A lot of people are transplants from other cities, so they’re here by themselves,” Hui said. “The group is friendly, and we’re more of a social group – so in addition to exercise, a lot of people feel they’re part of a friendly group. When they come out, it’s almost like coming out to see friends.”

Like Black’s group, this has led to friendships and plans to do social activities off the court. And for Hui, the group has provided an incentive to keep up a regular fitness routine.
“I always look forward on Monday and Wednesday to go out there and see all the members,” he said. 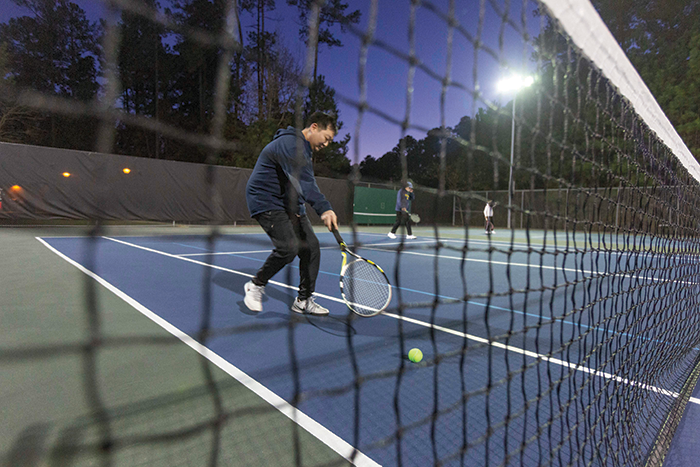 Nelson Rha retrieves a tennis ball during a game at Apex Community Park. He plays regularly with fellow tennis enthusiasts he met through the For Fun: Tennis/Pickleball group.

Message the organizer through the website, and view upcoming events. This meetup allows non-members to view events; however, the location is visible only to members who sign up for the group and join the event through meetup.com.