Deanna and Colin Crossman are the new kids in town, and they just want to fit in.

The couple has lived in Durham for 15 years, first as Duke graduate students then as entrepreneurs. Since 2006 they’ve operated The King’s Daughters Inn, a historic rooming house which they transformed into an award-winning bed and breakfast. 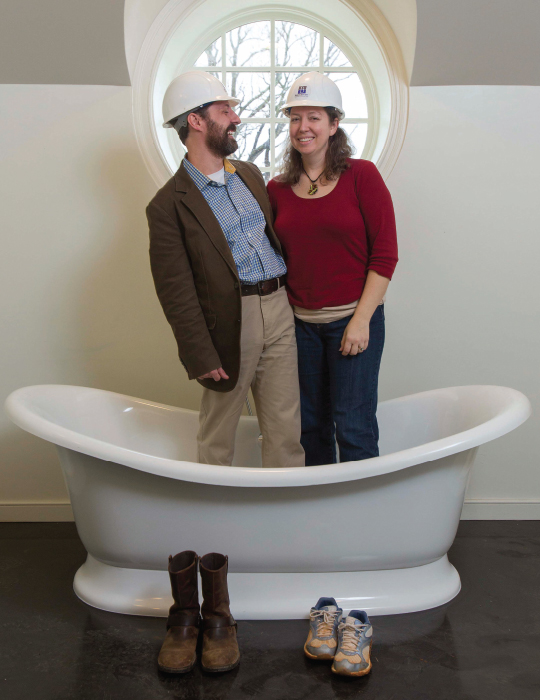 Colin and Deanna Crossman, owners of The Mayton Inn, are not sorry to see the end of its long construction process. “We’re ecstatic to be almost across the finish line,” says Deanna.

But they couldn’t resist Cary’s appeal and the chance to build The Mayton Inn.

“Cary has this identity. It knows what it wants to be, and the hotel fits in really well with the next phase of our lives,” said Deanna. “With a boutique hotel, the owners are very much the face of the business.”

Before they tackled The King’s Daughters Inn, the Crossmans had restored 18 historic properties in Durham, the youngest of which was built in the 1940s.

“The green and the historic, that is our passion and our penchant,” said Deanna. “The most green thing you can do is to adaptively reuse something that already exists. Tearing something down, throwing it all in the Dumpster, building from scratch — it’s so wasteful.” 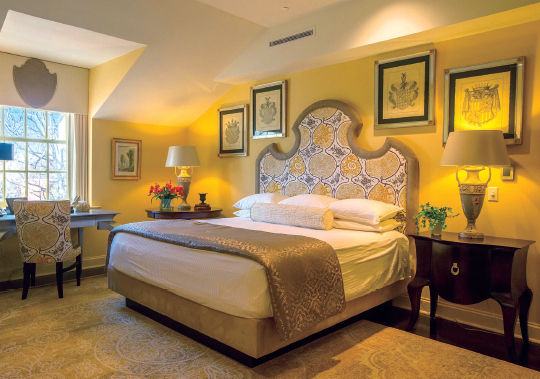 The second and third floors of The Mayton Inn have 43 guest rooms, with seven distinct decor styles.

In November 2011, Colin explains, the town was looking for advice on how to repurpose several historic properties including the Jones House, now the restaurant Belle at the Jones House.

“Ed came to us to talk about historic properties, walked into The King’s Daughters and said, ‘I want one of these in Cary,’” said Colin.

The Town of Cary had been looking to put a small hotel in downtown Cary for some time, but hadn’t found the right folks to build the property. Planners especially wanted the owners to be as local as possible.

“The local element is unique,” said Ted Boyd, the town’s current downtown development manager. “Every time you visit a downtown, wherever it is, you might think, ‘What is the one place I need to stay or go eat that I couldn’t find somewhere else?’ That ties into it, the unique component.” 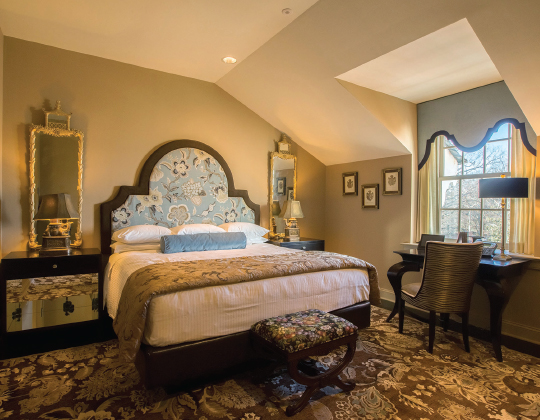 After those initial talks, it took another three years to work out the details of the $9.5 million project — Cary’s first downtown public-private partnership. The town provided a $951,000 mortgage and helped arrange a $1.4 million HUD loan. The rest of the financing came from a Small Business Administration loan.

“When you look at the investment that the town has made and the eventual return, just the development of the project and the construction itself, it’s a great value,” said Boyd.

When the Crossmans broke ground on The Mayton Inn in fall 2014, they expected to be finished within a year, but construction was delayed repeatedly by weather. But as 2015 drew to a close, finishing touches were being made, preparing for the January grand opening.

A mix of old and new

The Mayton Inn is built in the Georgian style, featuring brickwork that calls to mind Cary’s Page-Walker Arts & History Center and Cary Academy. The four-story, 55,000-square-foot hotel features 44 rooms, a lounge, gym, spa, bar and restaurant. The historic Waldo Rood House, relocated to the property and restored, serves as a separate bridal cottage.

“I think that reflects downtown,” said Boyd. “It’s a mix of old and new, and sometimes they’re close to each other. They did a really good job of trying to make the hotel look like it is something that has been there a long time.” 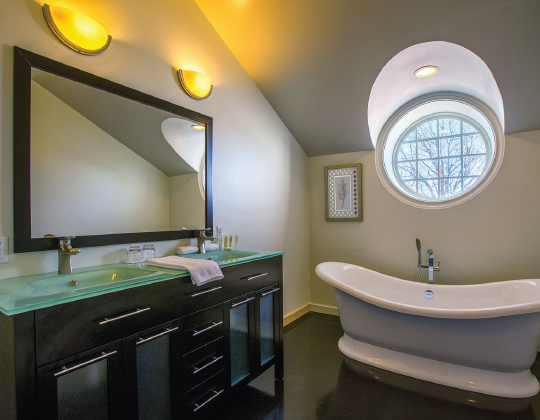 A round window is the focal point of this third-floor bathroom. One of Deanna Crossman’s favorite details is the glass sink basin, which is constructed in one continuous piece, with no seams or grout lines.

Throughout the hotel are echoes of history, particularly Cary’s train history. The bar is called The Highball, a name for a tall, simple drink, but also the description of a train moving at top speed. Several rooms take their names from notable locals — Waverly, Raines and Page. The lounge features chestnut flooring reclaimed from a Kentucky farmhouse.

Green technology is incorporated throughout, but it’s more than just LED lights and efficient plumbing. An energy management system in the guest rooms turns off power and lights after 30 minutes of inactivity. Dedicated outlets stay on to charge phones and other electronics. Instead of printing brochures, guest information is available on tablet computers installed in every room.

Despite their commitment to sustainability, the couple is adamant their green measures stay behind the scenes.

“An important part of being green is if the guest doesn’t care, we don’t want them to know,” said Deanna. “They want a beautiful luxury property, with nothing to affect their level of service and experience. If people don’t know we are green, they can stay, check out, and not know we are green. For those who care, the information is all over our website.”

The Mayton Inn may be a luxury hotel, but the Crossmans don’t see it competing with existing businesses. The smaller hotel fills a niche in the marketplace between the chain hotels and the nearby AAA Five Diamond Umstead Hotel, says Deanna.

“It’s not competition, it’s complementary to the products that are here,” she said. 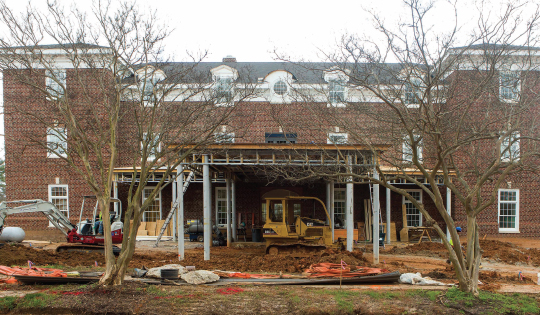 The front porch and the porte cochere take shape in early January. The brick exterior calls to mind other, older buildings in downtown Cary. “We don’t want to make it look historic if it’s not, but it needs to fit into the existing architecture,” says Colin Crossman.

They expect weddings to be a huge piece of the inn’s business, dominating weekend bookings. Already, brides are reserving The Mayton Inn for spring and summer ceremonies.

“We will bring people — a hundred people a night,” said Deanna. “We want to be a draw for downtown. I want the neighbors to come play in our restaurant, and I want our guests to go eat in the community.”

“It fits well with the vision of downtown redevelopment,” he said. “It’s making downtown a destination in terms of the ability to stay overnight. It ties in perfectly with the train depot and all the people coming through on Amtrak and people coming to the Triangle as a whole.”

With the opening of the hotel, the Crossmans will be making their own permanent move.

As part of their partnership with the town, the couple also agreed to restore The Mayton House — a 1920s bungalow once owned by a Cary mayor. The house was relocated to the rear of their downtown property, and once improvements are complete, the Crossmans will move in. 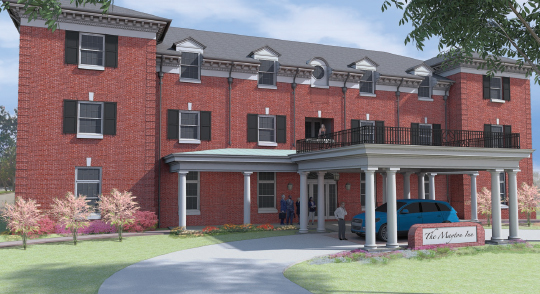 “We fell in love with it personally,” said Deanna. “We said, ‘It’s perfect. We just want to live in it.’”

They are already making themselves at home. Deanna is on the board of the Heart of Cary Association; they belong to the Cary Chamber of Commerce. The hotel’s grand opening event is expected to be a benefit for local nonprofit The Carying Place. 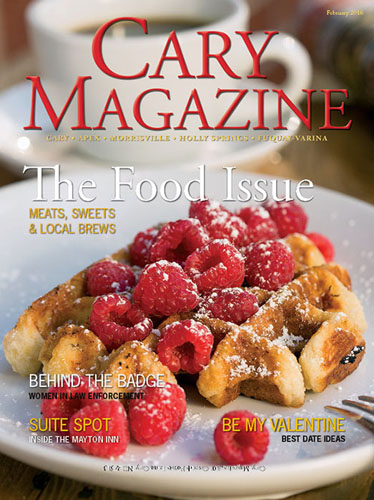