On the Friday before Apex’s Peak City Pig Fest, Shannon Turner is inside her air-conditioned RV, taking care of chicken business.

The pitmaster of the Muttley Crew competition barbecue team grabs a drumstick, trims the joint, peels back the skin, and cuts out the tendons. Finally, she scrapes the skin to near-transparency, docks it with a hand-held meat tenderizer, and pulls the delicate skin back over the meaty flesh.

This time-consuming process will be repeated two dozen times before the legs are seasoned, smoked and sauced. By Saturday afternoon, the couple will have also cooked three pork shoulders, several racks of pork ribs and a beef brisket. Only six portions of each meat — about a pound of each — will be turned in and judged on appearance, texture and taste.

“You try to impress the judges, and you’ve got one bite to do it,” said Brian Turner, Shannon’s husband and the other half of the Muttley Crew.

Competitive barbecuing is one of the faster-rising sports in the country, and it’s especially hot in the Triangle.

The Kansas City Barbecue Society, the premier governing body of competition barbecue, sanctions more than 500 contests annually. The Turners, who named their team after their five dogs, have been competing since 2013. They enter roughly 20 to 25 KCBS contests every year, mostly in the South, although they will head to Kansas City later this year for the 2019 American Royal World Series of Barbecue.

Shannon Turner says she enjoys the travel and getting to know people from all over, brought together by their love of competition and smoked meat.

“It’s some of the best people you’ll ever meet,” she said. “That’s the best part of barbecue to me – the friendship and the camaraderie of something like a contest brings everybody together as opposed to polarizing people.”

“Certainly, winning the female pitmaster was awesome, I can’t even put that into words. But equally great was when we won our first Grand Championship,” she said. “We’d been trying for so long. We’d been pretty close to getting it and then to finally win — it was just a great experience.”

That stellar moment came in July 2017 in Greenwood, S.C., after four years on the circuit and roughly 75 competitions.

“We had a good cook. It was weird, I FELT it. After we got done turning in, I was like, ‘I feel like this is really good.’ I didn’t want to say anything to my husband, because you think that, and you get disappointed,” Shannon Turner said. “But it did feel like such a good cook, and then to have our names called, it was great.”

Despite all the national acclaim, the couple always makes time for the Peak City Pig Fest, held every year in June.

The 2019 event, which gave away $12,000 in prizes, attracted 48 teams from four states and welcomed judges from nine states. Organizers say the quality of the judging makes the contest attractive, and it’s a hometown competition for cook teams from Wake and Johnston counties.

“No. 1, I get to sleep in my own bed and shower every day,” Shannon Turner said. “But No. 2, a lot of my coworkers, our friends, people who don’t normally get to see us compete can come. They can taste our food, they can hang out with us and they can watch what we’re doing.”

Terry Winebrenner, one of the founders of the Peak City Pig Fest and a certified KCBS master judge, says the Apex event draws backyard hobbyists as well as nationally ranked teams like Muttley Crew. Judging is the great equalizer.

“When you’re giving away free barbecue to your neighbor, everybody says you’re good. When you come out here and compete, that’s when it separates it out,” he said. “It’s all about the flavor profile and finding that little difference.”

Scott Hares says competitive barbecuing is much more popular here than in California, where he and his wife began cooking as Too Ashamed to Name BBQ in 2008. And the competition is fierce.

“There’s no hobby that’s not expensive, but at least with this hobby, I could walk away with a couple of checks. In 2016, we actually made money. That was back in California. We didn’t win a single competition that year, but we came in Reserve Grand Champion at most of them,” said Hares, who moved to Cary in 2017.

He has yet to find the same success in North Carolina, saying that he has struggled to finish in the top 10, even though he is preparing his meat the same way.

“It’s been difficult, plus there are a lot more teams here,” Hares said.

Jonathan Walker, Apex-resident and pitmaster of the Armed and Hammered BBQ team, has competed in all eight Pig Fests and says the local barbecue scene has exploded, from the number of cook teams to the level of expertise.

“The first year this was held, you didn’t have this big giant row of all these professional teams. It was mostly small backyard teams,” he said, gesturing at the Apex municipal parking lot, which was packed with cook teams, tricked-out RVs and elaborate smokers.

Walker enters a handful of events every year, and admits there are some tricky aspects of the KCBS style.

“Brisket is easily the hardest meat to get right. The window between bad versus good is very small, and you’ve got to hit it right on the mark to score.”

In it to win it

Shannon Turner agrees that brisket is challenging, and to give herself an edge, she starts with high-quality Wagyu beef, which costs around $150 for a brisket.

“It’s usually a make or breaker for teams,” she said. At the Peak City Pig Fest, “there are the teams that are on the professional circuit, who are going to use the high-quality meat. The local guys might use something from Sam’s Club.”

The quality and amount of meat needed for each contest makes for a costly hobby, and that’s just one of a team’s expenses. Each weekend contest costs upwards of $1,000, the Turners say, between the entry fees, gas for the RV, wood, charcoal, rubs, sauces and meat.

“It’s worth spending a couple dollars to have what you need,” said Brian Turner. “Our goal is to break even. Sometimes we’re a little ahead, and sometimes we’re not.”

Brian Turner says it’s all worth it — the expense, the time and the work. 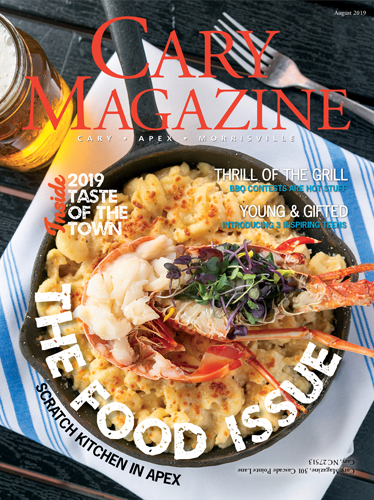