By Nancy Pardue
Photography By Jonathan Fredin May 1, 2015

Something’s brewing in Garner – and it’s more than just java.

Part coffeehouse, part music venue, that something is Lorraine’s, a unique concept that’s drawing crowds even from beyond the Triangle.

“I’ve always wanted a place where you could bring a date, or the family,” said Lorraine Jordan, mandolin-playing bluegrass great, founder of the Carolina Road band, and the creator of Lorraine’s Coffee House & Music.

“At a certain age, you outgrow the club scene. And some people, like me, just want a laid-back, family-style place.”

Autographed photos paper the walls at Lorraine’s, many of them from nationally-known performers whom Jordan befriended during her 20-plus years on the road.

Set in a former drugstore in the town that raised up country singer Scotty McCreery and serves as home to renowned jazz trumpeter Tom Browne, Lorraine’s is an alcohol-free concert hall offering live music three nights a week, free jam sessions, a songwriters’ circle, and workshops with professional musicians. It opened in July 2014.

Bluegrass is queen here, but jazz, country, blues, gospel and classic rock acts also grace Lorraine’s stage. Many of these performers are friends Jordan’s made during her 20-plus years on the road, including national names like Marty Raybon and Shenandoah and The Grascals, mentored by Dolly Parton.

Besides the music, the menu for evening concert-goers — and daytime guests — features specialty coffees, deli sandwiches and salads, soups, pastries and cheesecake by local business Cheesecakes Plus.

On this concert night, anticipation vibrates through the chatty crowd, as the crew makes final sound checks on the 17-foot stage, under truss lighting. The setting is intimate, with capacity for 156 people.

In the audience, toes begin to tap and heads bob as the family band twangs three-part bluegrass harmonies. This is pickin’ and grinnin’ at its best.

“We’ve passed by, and I wanted to know what goes on in here,” said Lorraine’s first-timer Sara Rogers, in attendance with her husband, Dock. “I had to talk him into it!”

Friends’ recommendations boosted their curiosity, Dock says, and he’s glad they came. The couple lives just outside of Cary.

“Not many people put in the hours that Lorraine does. This is a whole different approach to entertainment,” noted Garner Mayor Ronnie Williams, a Lorraine’s regular with his wife, Betsy.“And if you’re not a bluegrass fan, you will be by your third time here.”

“We love the music, and we love the people. It’s a great atmosphere,” added Paula Anderson. “It’s like sitting in your living room, hearing live music. A lot of our friends come here and hang out, and women can even come by themselves and feel safe.”

Anderson and her husband, Earl, have become such regulars at Lorraine’s that Anderson is now offering music-minded bus trips and cruises via her firm, Southern Cruise & Travel, in partnership with Jordan. It’s another local business connection.

Upcoming trips include July’s Bluegrass & Buggies, to hear Carolina Road perform at a festival in Pennsylvania’s Amish country, and December’s Jordan-produced Christmas in the Smokies excursion to Pigeon Forge, Tenn.

Mingling with Jordan in the crowd at Lorraine’s is Steve Dilling, a Cary High grad who holds 11 International Bluegrass Music Association awards in his own right. A longtime member of IIIrd Tyme Out, Dilling currently performs with the band Sideline. As manager of Jordan Entertainment, he books Carolina Road and hires entertainment for the coffeehouse.

Between them, Jordan and Dilling have 53 years on the road as musicians.

On the second Monday of each month Lorraine’s hosts a songwriters’ circle, he says, and one-day workshops begun this spring are led by premier bluegrass musicians, on their specific instruments.

A first-anniversary party for Lorraine’s is being planned for July, and this fall the venue will host a luncheon of artists and worldwide radio DJs in town for World of Bluegrass, the IBMA’s annual conference, set for Sept. 29 through Oct. 3 in downtown Raleigh.

Lorraine’s proximity to I-95 and I-540 works well for these band pickup dates, he adds, as the venue becomes part of the overall Triangle music scene.

Meanwhile, Jordan jokes that each time she considers retiring from travel, Carolina Road lands another No. 1 song that spurs her on.

Fresh from recording the Country Grass CD with artists like Crystal Gale, Lee Greenwood and Willow Spring’s Tim Cifers, who performed on TV’s The X Factor, Jordan says even in her road trip absences, Lorraine’s is meeting her goals as a community center.

Lorraine’s serves as a site for private parties, rents its conference room, and is even home to Just Jesus, a contemporary praise service on Sundays, featuring Jordan on bass.

“Steve calls this ‘Garner’s gathering place,’ and that’s what it’s become,” Jordan said. “The fans, the friendship — it’s a family.”

Banjo Performer of the Year:
Ben Greene of Carolina Road

Presented by Society for the Preservation of Bluegrass Music of America, February 2015 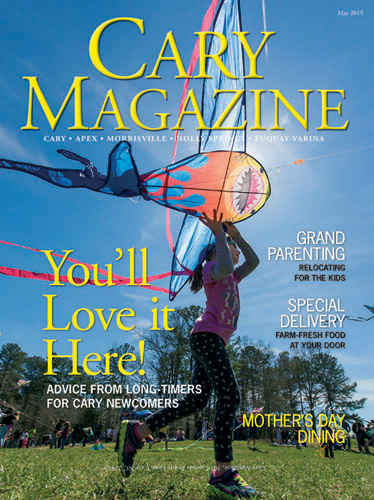