By 2013, Andrea Peet had run a marathon and completed nine triathlons. The following year, she was walking with a cane.

Doctors diagnosed her with ALS in 2014 at the age of 33, giving her a life expectancy of two to five years.

Peet, wearing a Team Drea T-shirt, launched the organization to create awareness around ALS and to raise money for research. (Submitted photo)

ALS (amyotrophic lateral sclerosis) is a neurological disease that is progressive, meaning symptoms will worsen over time, according to the National Institute of Neurological Disorders and Stroke. There is no cure, and those affected by the disease eventually lose their strength and the ability to speak, eat, move and breathe.

Faced with the news, Peet could have chosen to dwell on the darkness of her diagnosis. She admits she did struggle in the beginning.

“I was just trying to reconcile that I was going to die in two to five years,” she said, “that I’d become paralyzed and not be able to talk or breathe; that I would have to have someone do everything for me.”

It’s clear today that Peet has no intention of sitting at home in despair. More than five years later, she is beating the odds she was given. She still races with the help of a recumbent trike, and she’s set a goal of completing a marathon in each of the 50 states.

“I just feel grateful for every day that I have my independence,” Peet said. “I want to make the most of the time that I have.”

In 2015, she created Team Drea, which encourages athletes to take on a race that challenges them and use it as an opportunity to raise money for ALS research. To date, more than 150 athletes in 22 states and internationally have raised more than $400,000. Peet and her husband, David, established the nonprofit Team Drea Foundation in 2016 to raise money to support ALS research.

Team Drea has a secondary mission that’s close to Peet’s heart. She hopes people will think about how amazing it is that their bodies can get on the treadmill or go out on the road for a run.

Andrea Peet and her friend Julie Wesner are pictured at the Ramblin’ Rose Triathlon in Chapel Hill. Team Drea encourages athletes to push themselves and to raise money for ALS research. The group has raised more than $400,000 to date. (Submitted photo)

Peet now uses a walker to get around, and she has to think about every step she takes. Her brain is forgetting how to tell her muscles what to do.

“I just want people to appreciate what their bodies can do,” she said. “You never really realize that until it’s all taken away.” 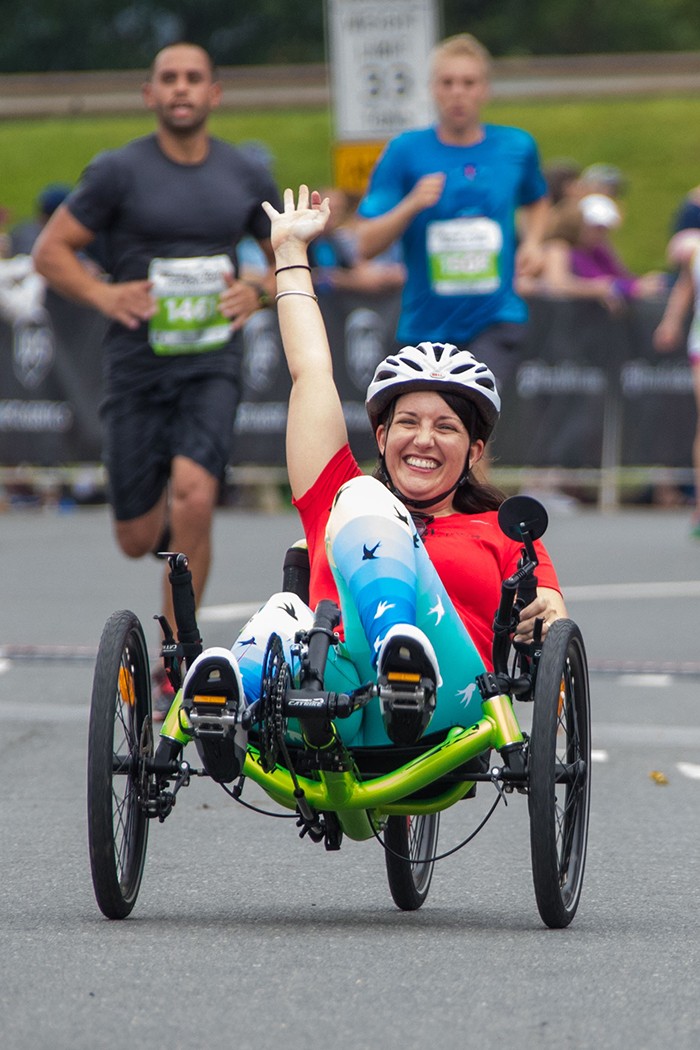 Peet plans to continue competing in marathons as long as she can, and she has set a goal of completing a marathon in all 50 states. (Chris Szagola photo)

Peet’s optimism and attitude are magnetic, attracting many to Team Drea’s mission.

“There’s something powerful about the way she tells her story and the way she interacts with people,” said Jillaine Baker of Durham, a longtime Team Drea supporter. “ALS is really hard, and she has those bad days that a lot of us don’t see. But she also has made a choice to find joy, and to find good, and to keep racing and doing things that she loves.”

Baker lost her mother to ALS in April of 2009. She and her sister later ran their first marathon to raise money for research into the disease, collecting $20,000 for the cause.

After reading an article about Peet and Team Drea, Baker reached out to Peet, sharing her own mother’s story. They met for the first time on Mother’s Day 2015.

“It was an instant connection with our personalities, but also for me, whether it’s someone who has ALS or they lost someone to ALS, there’s this undeniable connection where you know that you don’t have to explain,” Baker said.

In the time since, the two have completed races together, Baker participates in Team Drea events and fundraisers, and she has raised more than $40,000 for ALS research.

“Our friendship and the way we have come together feels to me like a victory over the disease,” Peet said.

Visit teamdrea.org/join to see how you can choose a race that represents a challenge to you, and raise funds for ALS research. Or sign up for the RDC marathon, half marathon, 10k and 5k on Nov. 9-10, 2019 (runrdc.com), which benefits the Team Drea Foundation and ALS research at Duke. The races will take place on the American Tobacco Trail.

Baker is quick to echo those sentiments and shares Peet’s belief that Team Drea is also about being grateful for what each person’s body can do.

“This is something powerful to me, because I watched someone’s body begin to deteriorate and not be able to do certain things,” Baker said. “If I’m on a run, and it’s hot or boring, I think to myself, I am grateful for this.”

By May 2020, if all goes as planned, Peet will complete her 21st marathon in Alaska, all the while spreading the word about Team Drea’s mission and raising money for ALS research.

Without a cure for ALS, Peet knows her time is limited. However, she is confident her story will continue through people like Baker, who plans to raise money through Team Drea with the goal of seeing a cure for ALS within her lifetime.

“I don’t ever see myself not racing, raising money, and building awareness until there is a cure,” Baker said. “I have to believe there will be a cure before I die.

“It’s a hopefulness that I refuse to let go of. And since I don’t plan on letting go of that, there’s no way I won’t be involved in Team Drea or anything else that has to do with finding a cure for ALS.”