Amy Dozier is still getting used to the idea that she and her daughter, Emma, will be moving into a new home this fall. Mix in the notion that the deed comes free and clear — with no mortgage — and it’s all a bit overwhelming.

“I have told them multiple times, ‘You could be building me a tiny house, and I would be completely happy,’” Dozier said of the builder, Experience One Homes. “I just feel so blessed that they’re so generous and want to do this for me and my family.”

The home, located in Apex’s Sweetwater community, was provided by the nonprofit Operation Coming Home in memory of Dozier’s husband, U.S. Army Staff Sgt. Jonathan Dozier. He was one of six soldiers killed when a house rigged with homemade bombs exploded during combat operations in Sinsil, Iraq, on Jan. 9, 2008.

Operation Coming Home was established in 2007 by the Triangle Veterans Association and members of the Home Builders Association of Raleigh-Wake County to provide houses for families of severely wounded veterans, at no cost to the recipients. Each house costs an average of $250,000 to build, and nearly all of the materials are donated by builders, vendors, contractors and other individuals in the community.

This is the 20th home built by OCH, and is only the second instance that the nonprofit has honored a fallen solider, rather than an injured veteran. 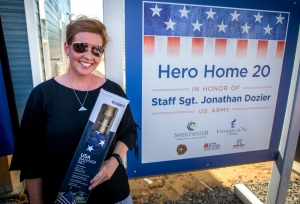 Since her husband died, Amy Dozier has dedicated herself to serving veterans and their families.

Dozier says after her husband was killed 11 years ago, she spent the first several years “under the radar,” just trying to care for her 13-month-old daughter.

Eventually, she was able to move forward, and inspired by the groups who had helped her, she gained a master’s degree and became a nonprofit strategist.

“There was so much that I felt like I was doing alone,” Dozier said, “and to have all this help from the community and from other nonprofits, really inspired me to give back as well.”

Since 2012, she’s been a mentor to other war widows and an advocate for Gold Star and veteran families. This strong desire to serve seemed to strike a chord with the members of OCH, she says. They decided a home was a good way to support her efforts to help other grieving families.

“They said, ‘Wow. She’s really taken something tragic and turned it into something beautiful. And we think we can help be part of that story,’” said Dozier. 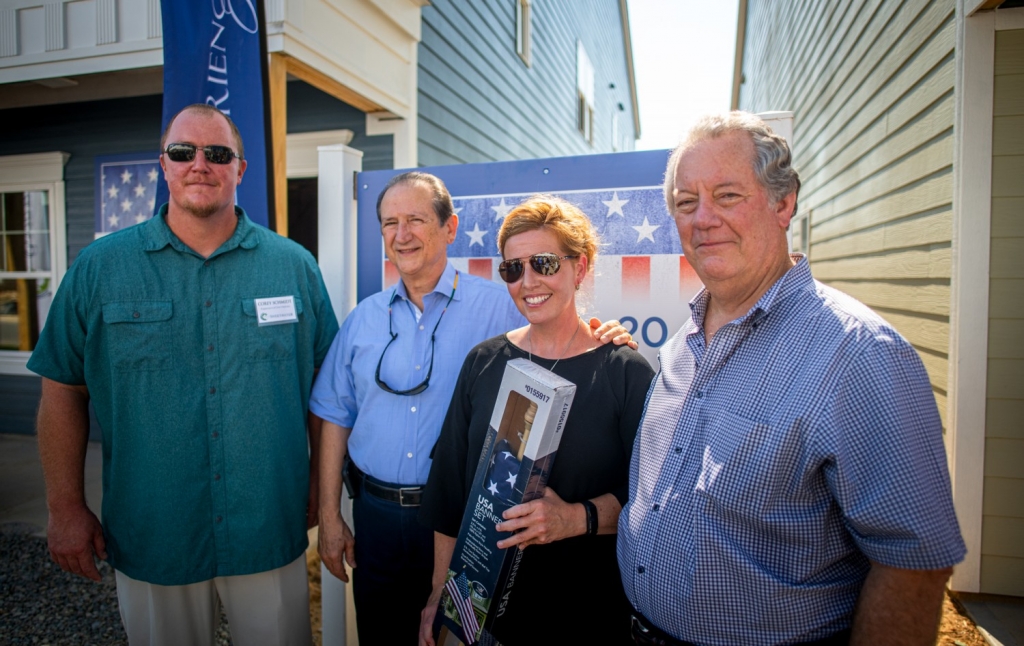 Instead of a groundbreaking, Operation Coming Home partnered with Experience One Homes and the U.S. Veterans Corps to hold a Raise the Roof ceremony at the site of the new home on Aug. 22.

Corey Schmidt, the owner/manager of Experience One Homes, explained that building the Doziers’ home has been personally meaningful.

“I lost a friend of mine while he served in Operation Iraqi Freedom on Oct. 15, 2005,” he said. “Since that day, I’ve been searching for a way to truly give back to our veterans and their families.”

When another friend and veteran received a house from OCH in 2013, Schmidt was impressed by the group’s mission. When he was invited to build a Hero Home in the Sweetwater development, Schmidt and his business partners jumped at the chance.

“The most unique part of OCH are the people who run it. They are veterans whose life’s mission is to wholeheartedly give back to other veterans that have given us all so much,” Schmidt said. “It is an awesome thing to be a part of.”

Dozier and her daughter will receive the keys to their new home at a ceremony on Nov. 11.

“I’m really looking forward to seeing the memory boards that people signed at the ceremony,” she said of the messages written by members of the community on Aug. 22. The boards will be installed in the rafters of her new garage.

“I’m also really excited to get in the kitchen and cook over the holidays.”

There are several ways to get involved in the nonprofit’s work, from cheering on home recipients at dedication ceremonies to donating to the Operation Coming Home Foundation through its Facebook page. 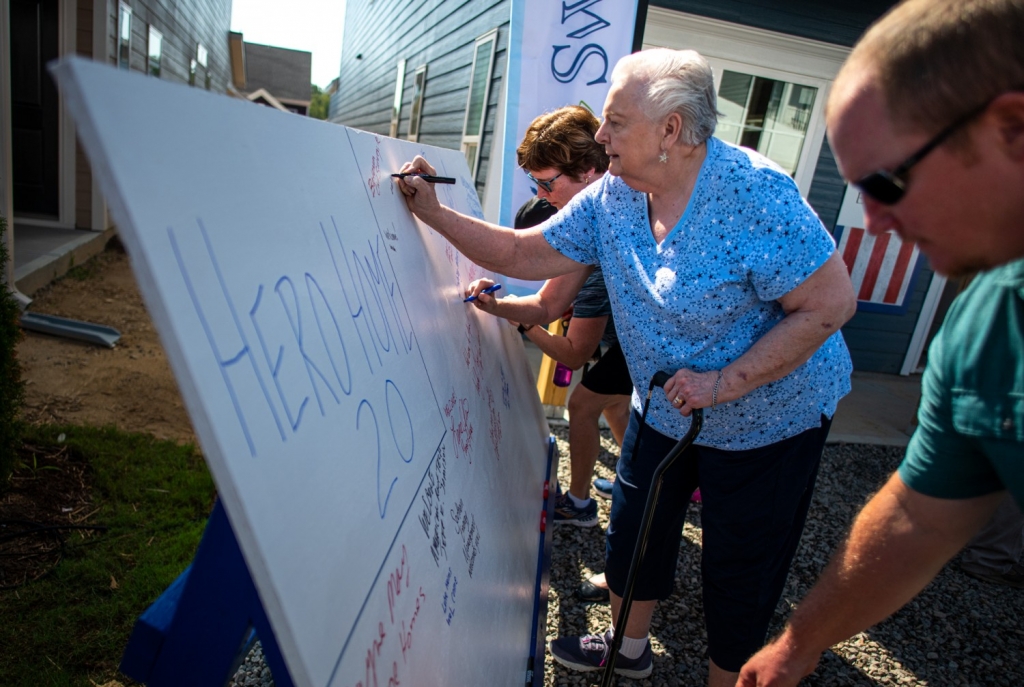 Members of the community write messages of support on boards that will be installed in Amy Dozier’s new home.