Education:
Bachelor’s degrees in sociology and psychology, and master’s in clinical psychology, all from Southern Methodist University; M.P.H., and DrPh in physical fitness programming, University of Texas Health Science Center

Accolades:
2000 U.S. Olympic Committee Developmental Coach of the Year in triathlon; Inaugural Cary Hometown Spirit Award Winner; 2000 inductee into the YWCA Academy of Women for Physical Fitness & Recreation; 2008 Cary Rotary Citizen of the Year for Service to the Community

Fun facts:
Did an Ironman distance race in Canada in a frozen downpour; has twice been an invited athlete to the Hawaiian Ironman.

For some, the idea of an athlete’s sweaty embrace might not sound inviting, but for Alisa Wright Colopy, it’s one of the best things out there.

“There’s no better hug to get than a sweaty hug from an athlete who’s  worked hard,” said Wright Colopy, founder and president of Cary’s Fit and Able Productions Inc.,which works with athletes of all ages and abilities to create a healthier community.

It is what’s folded inside those hugs that make them special: the sense of accomplishment, confidence and empowerment that comes with finishing a workout or a race.

She’s had a lot of hugs: In the 20 years since Wright Colopy founded the nonprofit Fit & Able, she’s worked with more than 5,000 athletes.

Fit & Able began as a youth triathlon team in 1996, and has grown to include dozens of annual race events, such as the Hot Chocolate Run and SPCA Doggie Dash, as well as an all-ages, year-round training team, and a website full of online resources including podcasts,  courses and more.

It’s a different life from Wright Colopy’s days growing up near Cincinnati, where she says she was not a high school athlete, mainly due to the lack of offerings for girls.

“I didn’t even realize I was athletic until college,” Wright Colopy said.

She became a runner and a cyclist in college, and then a swimmer when she met her husband, Mike, also a swimmer. That led to her first triathlon in 1982, and she’s competed in hundreds of races since.

Wright Colopy moved to Cary in 1996, about the time she was dismayed to find a report by the Centers for Disease Control ranking North Carolina at the bottom of the nation in youth fitness.

Not long after, under her leadership, the YMCA held its first triathlon. It was a success, but very costly, and while Wright Colopy says the YMCA pledged to support triathlons in the future, it didn’t have the financial means  to do so.

To continue what she’d started at the YMCA, Wright Colopy founded Fit & Able to promote the importance of fitness and to host events. The name Fit & Able had emerged more than a decade earlier when her husband created a cartoon story about couple named Fit and Able, who, as they put it, “took control of their destinies and reclaimed their health,” much like the athletes Wright Colopy  works with each day.

“I love staging races,” Wright Colopy said. “I was an athlete. I’ve done hundreds and hundreds of races.”

By early 2000, she’d gotten tired of what she terms the “me, me, me” mentality of being an athlete. She’d spent years training daily for races, first thing every morning. While she’s continued to stay fit, it was around that time Wright Colopy turned her focus to others looking to improve their health and fitness.

Today, her motivation lies not in creating the next elite athlete, but in encouraging everyone to develop healthy habits and be the best they can be.

“I really like working with people where they almost don’t know what they need — they just want something different,” she said. “I get more out of it than I give. We have training groups several times a week, and it’s the highlight of my day.”

Wright Colopy is committed to ensuring each person works at his or her own level, but always remains challenged.

“I love seeing people set and reach their goals,” she said. “I just give them the path, and they’re the ones who take it.”

This applies especially to kids and teens, who Wright Colopy feels learn about persistence and overcoming challenges as they exercise. She provides encouragement and support along the way.

Over the years, she’s seen fitness and athletes change. Where there were few sports options in her high school for women, now she often sees more women compete than men. Attitudes have changed too.

“Women pull each other along,” she said. “It really is a different kind of competitive model that we can all win.”

At any race staged by Fit & Able, the finish line is open until the last person crosses it.
“We want everyone to know they’re successful for doing it,” she said. “There’s the intrinsic reward of finishing it.”

Wright Colopy recounts many special stories of the people she’s met. She cherishes the moments where kids with physical challenges are able to succeed, recalling one girl with Smith-Magenis syndrome, a developmental disorder, whose father and sister accompanied her so that she could complete a race.

“I was providing something where everybody, of every ability, had the same starting gun and the same finish line,” Wright Colopy  said. “It’s a great equalizer.”

She has kept up with many of those athletes’ lives over the years, seeing them go on to great accomplishments. Their success is her reward.

“The reality is, all those people have had such a wonderful impact on me,” she said. “It’s a good life just doing what I do.” 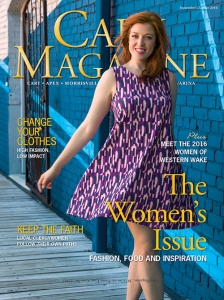