While hens happily scratching for bugs and worms in a downtown yard will elicit wide-eyed stares from passing motorists, the sight may become more common.

By the end of this year, it is expected that all five Western Wake towns will have rules permitting backyard chickens in residential areas. Often the approval comes with regulations, but fans say the birds are worth flying through a few hoops.

“When you hear the word livestock, you have this mental image,” said M’Liss Koopman, chair of the Tour d’Coop, which raises money for Urban Ministries. “They’re often lumped in with cows and horses, but they actually work well in an urban environment.”

“They are pets with benefits for me,” said Pearl McAdaragh, who lives in downtown Cary. “I find it really relaxing to sit and watch them scratch. It’s like a dance they do. They make me happy.”

McAdaragh and her son-in-law built the posh Chez Poulet on her quarter-acre corner lot in spring of 2014. Her four hens are all named for Disney characters: Daisy, Elsa, Minnie and Belle.

“I keep them for the health benefits,” she said. “The fresh eggs are great.”

She collects about 8 to 9 eggs a week, but McAdaragh says she would keep the chickens even if they didn’t lay eggs. The birds forage for insects, but only when she is outside to watch for hawks.

Right: McAdaragh gives her chickens shredded cheese as a treat. Daisy likes it so much, she will jump for it.

“I get fertilizer, and they take care of all the bugs,” she said. “They will pick a fly or a beetle out of the air. They are so fast. That’s one of the best things, I don’t have to use chemical pesticides.”

The Town of Cary approved backyard chickens in 2012, with regulations that include placement and size of the coop, a limit of five hens and license requirements.

In late summer or early fall, Fuquay-Varina will consider allowing chickens in all residential districts, with rules similar to Cary’s, says Michael Sorensen, planning director. Currently chickens are permitted in areas of Fuquay-Varina which are more agricultural and have large lots.

In January 2014, Pearl McAdaragh moved to downtown Cary, and that spring worked with her son-in-law to build the posh Chez Poulet. “I did a lot of research before I built it. I wanted it as low-maintenance as possible,” she says.

The proposed ordinance would cap the number of hens at five, forbid roosters, and establish guidelines for the size and location of the coop and pen. A license requirement is also likely.
McAdaragh says it was easy to get a license in Cary, and she has never had any complaints from neighbors. Some even bring their children to visit her girls.

Debate and a compromise

Marilyn Jesrani of Holly Springs says keeping chickens has been a great learning experience for her kids, ages 16 and 12.

“They used to help me with all the tasks,” she said. “I know they are going to walk away with some sustainability skills. Now they are my pets, but how many kids have to feed the chickens and check for eggs before school?”

Marilyn Jesrani holds her hen Biscuit, which she raised from a chick. “I love animals. I’d like to live on a farm, but this is the closest I’ll ever get,” she says.

Jesrani has kept chickens for four years in the backyard of her wooded, suburban home, and she looks forward to making them legal.

A science teacher at Holly Ridge Middle School, she spoke before the Holly Springs Town Council last summer when it was considering whether to allow chickens. She addressed concerns about noise, disease and cleanliness, but she also talked about the fun she has with her hens, Biscuit and Polly.

Mayor Dick Sears says there were strong feelings and lots of debate on both sides of the issue, but in February the Holly Springs Town Council unanimously agreed to allow residents to raise hens if certain conditions are met.

Among these is a unique provision that residents must get prior approval from their homeowners association or submit a statement saying they have no HOA in order to get a license. Other towns don’t allow hens in areas with covenants against them, but leave the enforcement to the HOAs.

“A very important consideration was about the HOAs and what they allow,” Sears said. “If your HOA allows it, that’s fine with us. If your HOA doesn’t allow it, then they don’t allow it. That seemed to be a compromise, versus saying yes or no.”

Polly, left, lays one or two blue eggs each week. Biscuit, right, will lay a brown egg nearly every day.

“I thought the ordinance was a really good compromise,” agreed Jesrani. “It comes down to the person who has the chickens has to be responsible.”

While there is an HOA in her neighborhood, she checked with all her neighbors before she got her first chicken, and has never had any complaints.

“I don’t think it’s a fad, but it’s not going to become this big thing, because it is a commitment,” said Jesrani. “If someone is going to have chickens, just like any other pet, they should look at what responsibilities come with that pet. With the chickens, are you going to go out there when it’s really cold and take care of them? I still have to go out and feed them even when it’s been raining. That’s not so much fun.”

Lauri Westmoreland knows all about that kind of commitment. She cares for 28 birds on 1.25 acres just beyond the edge of Cary, although the Wake County property has an Apex address.
“We call this Fort Knox,” she said, explaining that she and her husband, who both trained as engineers, reinforced the sprawling wire and wood complex after deadly incursions from possums and a neighbor’s dog.

Lauri Westmoreland feeds her chickens oatmeal and plain yogurt to promote egg production. The birds also get chicken feed, kitchen scraps, and anything they can catch. “They will eat any kind of bug or animal. If a snake gets into the coop, they will tug-of-war on it,” she says.

Wake County doesn’t cap the number of birds and even allows roosters, as long as neighbors don’t complain. Morrisville follows the same guidelines. In Apex, hens are fine but no roosters.

Westmoreland’s two children, ages 7 and 5, help gather the eggs, sometimes as many as two dozen a day. She sells eggs to a few friends, but mostly the family of four eats the eggs themselves.

“We eat a lot of eggs,” she said. “In one sitting we will eat 10 eggs. We were buying the 5.5 dozen case of eggs at Wal-Mart every two weeks. I thought, ‘This is ridiculous. I just need to get some chickens.’”

Lauri Westmoreland’s chickens lay about 15 to 18 eggs a day, sometimes as many as two dozen a day.

In 2012 they began with a half dozen hens, and now the birds are an integral part of the family’s lifestyle.

“I’ll keep chickens for the foreseeable future,” Westmoreland  said. “I like the rainbow-colored eggs.”

In June, chicken aficionados in Raleigh and Cary will open their coops and gardens to visitors as part of the annual Tour d’Coop. The event educates the public about chickens as pets and proceeds benefit Urban Ministries of Wake County, a nonprofit which works to alleviate poverty.

“There is so much ignorance around poultry and how it is raised,” said M’Liss Koopman, chair of the event. “People think that chickens are mean, but they make good pets. When you hand raise them, they follow you around like a dog.”

In 2005 a group of friends in Raleigh’s Five Points area decided to host a tour of their chicken coops as a neighborhood event. It soon grew so popular, the organizers began selling tickets with the funds going to Urban Ministries.

Their reinforced coop keeps the hens safe from predators.

Among its other services, Urban Ministries maintains a community garden, hosts healthy cooking and nutrition classes for its clients, and works to get more fresh vegetables in food pantries.

Pearl McAdaragh welcomed roughly 175 visitors to her Cary coop last year, one of about two dozen sites on the self-guided tour. Organizers expect to have a similar number of coops this year. 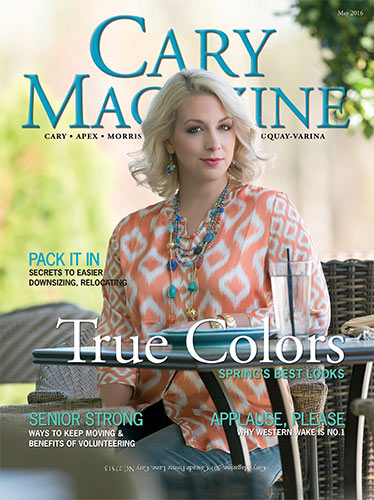